The Elephant in the bathroom 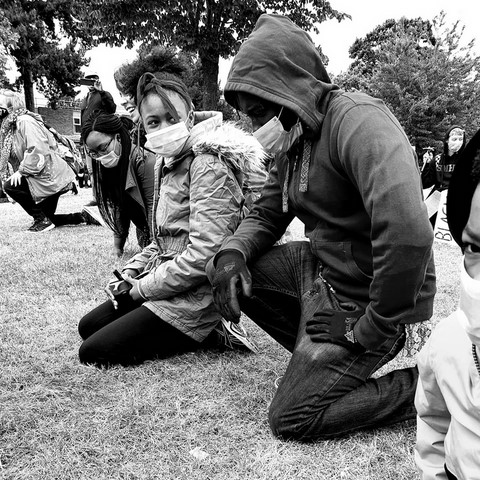 The walls of our home have seen some cracking conversations with our kids, no questions are prohibited, my husband and I often exchange quick glances of 'You can answer that one', or 'where did that come from!' but we keep the dialogue open and if we don't know we try our best to find out. Over the past couple of weeks though our conversations haven't been enough, our words have been accompanied by tears, praying, reading, writing, tears, anger, confusion, tears, silence, kneeling, kneeling and kneeling.

I have longed to hear the questions like, 'what would you do if there was an elephant in the bathroom?' but we confront questions like 'Would someone kill me because I am brown?', 'Have people been mean to you because you are brown?'. How do you tell your most precious children, 'Yes and Yes’? We could lie and say no that doesn't happen and there must be an explanation other than racism  for all these deaths, there must be another reason why people have spat at me in the street followed by a racist slur, why police have pulled over my husband, why he was followed into church once by police, why I have been pulled aside at airport security and told to ' get back Chocolate' by security whilst my white friend was referred to as 'Miss', why  people ask if I was the person they had spoken to on the phone as my voice doesn't match my face, no there must be another reason. As a mother, as a human I want desperately for there to be another reason, but there isn’t, and it would be unjust for me to say otherwise.

Regardless of your personal view on why George Floyd was stopped by police I hope you can agree with me that his death was caused by murder.  Have you ever knelt on one knee for 8 minutes and 46 seconds? I did today alongside my family and others. It's uncomfortable, at about 2 minutes in I wanted to sit down or stand up anything to get out of that position, but as my 6 year old daughter knelt next to me whilst wrapping her arms around my neck I realised, I still had breath to speak, I had feet to stand against hate, I had choice to move and act, George Floyd does not. His death and countless others who have died at the hands of racism they can't move forward, their deaths have made people uncomfortable and it should.  Our friends are uncomfortable, some don't know what to say, some are listening, some are on social media standing with black and brown people who face racial discrimination on a daily basis, some are vocal some are silent. We are uncomfortable, we have suddenly become a topic of conversation, we have become see-through and see it as a responsibility to bare what it is like living as a minority in the UK. Suddenly people want to know, it's good, its uncomfortable, its progress. But there needs to be a point when being uncomfortably evolves to intentional change.

Whilst kneeling in silence, I also realised that the police officer who placed his knee on a Georges neck must have been committed to what he was doing, at no point did he relent until George was unconscious, to bare your weight for that amount of time and to do it to another person who is pleading for life is intentional commitment to harm. Think about that for a second, there are people who are committed to doing harm, there are also people who are committed to discrimination, be it through racial profiling, not sitting next to a person who is black and the classic 'hold on to your bag a little bit tighter' when a black youth walks by. If only we were more committed to respecting each other, to pouring out unconditional love, to building relationships with people who don't come from the same background, race or culture Gloucestershire would be a very different place, it might start to look like what God had in mind for his children.