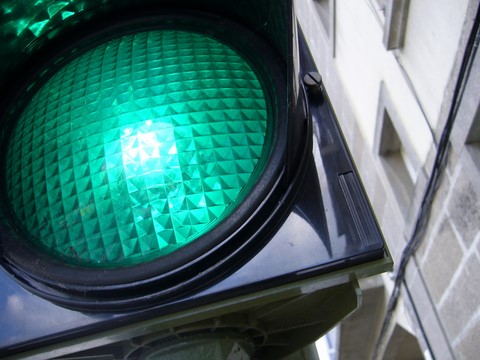 We have all sat at traffic lights waiting for them to go green.  As it does we get ready to pull away but a car ahead of us is not moving.  Either they are too busy sorting out their hair, lost in thought or they simply don't like the shade of green of the go light so they are not moving.  It is frustrating, you want to move forward but someone else refuses to.  If we are honest we have all been the driver holding up the traffic at some point.  Whilst we get frustrated about the person who is not moving forward I wonder if in our everyday lives we are often like the person stopped when they could be going.

The word go appears in scripture over 1300 times, stop only appears about 70 times.  We should be a "Go" people who are always looking to move forward and walk into the things God has placed before us.  When we are at traffic lights we don't sit and debate whether the colour is quite right or even if it is actually green.  We don't think that the green go light applies to someone else rather than us or even if we are getting it wrong and the light is actually red.  How often do we do the same with the Word of God?
The most obvious "Go" in scripture that most people will think about can be found in the Great Commission of Matthew 28: 16-19.  "Then the eleven disciples went to Galilee, to the mountain where Jesus had told them to go.  When they saw him, they worshipped him; but some doubted.  Then Jesus came to them and said, "All authority in heaven and on earth has been given to me.  Therefore go and make disciples of all nations, baptising them in the name of the Father and of the Son and of the Holy Spirit, and teaching them to obey everything I have commanded you.  And surely I am with you always, to the very end of the age."

We always think about the second go but if they disciples hadn't obeyed the first go they wouldn't have heard the second.  Jesus had previously told them to "go" to the mountain.  Their obedience to this first go allowed them to be commissioned by Jesus to "go and make disciples of all nations".  I wonder what would have happened if the disciples had not gone when they were first commanded?

Throughout scripture God tells people to go, the response varies, Jonah goes in a completely opposite direction, Gideon insists on God giving him a sign first and when he gets that he asks for another sign just to make certain.  Jonathan on the other hand goes out of his way to hear a yes.  In 1 Samuel 14 Jonathan sneaks out of the Israelite camp with his armour bearer.  With one sword between them they head off to the Philistine outpost.  At the base of a cliff below the Philistine outpost Jonathan turns to his armour bearer and says "If they say "Come up to us," we will climb up, because that will be a sign that the Lord has given them into our hands."   I for one would not have volunteered to be Jonathan's armour bearer!  Everything was wrong with his plan but before the armour bearer had an opportunity to hand his notice in the Philistines called down the encouraging words "Come up to us and we'll teach you a lesson."  To Jonathan this is roughly translated as "Go" and he climbs up the cliff with his armour bearer convinced that God is one his side and has given him the ground to claim.  His actions lead to the Philistine army panicking and a victory for Saul's army.

Jonathan wasn't determined to hear a "no" but was looking for God to say "Go".  If we are honest we often are the other way round, we want "no" so we don't need to "go".  The excitement is in the "go" but we crave the security of the "no".  We need to become more like Jonathan, a people prepared to go, willing to step out despite the odds and willing to risk it all for God.  This may be in sharing our faith with a friend, taking an opportunity that is before us or doing something that needs to be done and we don't see anyone else stepping up to the plate.  For us it has been stepping out into Gloucestershire.  This passage has been one we have focused on as a team for a few months.  Each time it seems that the cliffs surrounding us are too big or that the challenge is impossible someone comes and shares a verse about not being discouraged and to keep going.

We will continue to "go" because God's people should be a "go" people, not a "no" people.
Tweet