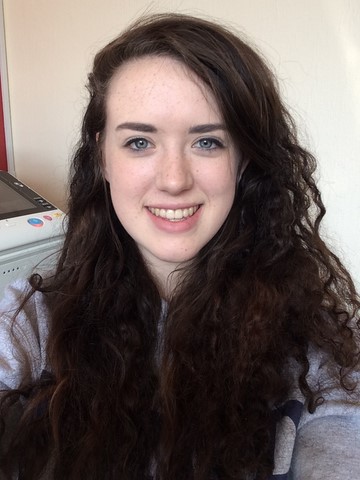 It was a busy start to Bekky's gap year with us as a YFC One volunteer.  Bekky has been placed in Holy Trinity in Tewkesbury.  Our volunteers are involved in working with the young people in their host church as well as working in schools and clubs with us.  Besides the regular youth work Bekky has been involved in a number of other events with the church this term.

During October half term Bekky ran an Open Doors “Blackout” event.  It was a sleepover in the church building with the young people turning off their phones and staying off social media for 24 hours in order to raise money and awareness for persecuted Christians in the Middle East.  Bekky was involved in setting up a prayer room, with stations for the young people to read about the things God is doing in these countries, to be creative in their prayer and worship, and to spend time with God. Next door was a worship room where there were sessions of creative worship.  It was a great 24 hours of prayer, worship, games and fellowship. Bekky was particularly touched by the willingness of adults in the church to come and help out with the sleepover by providing  meals and showing their support for the young people.

In November, Bekky and a couple of other leaders took the girls from the Holy Trinity Tewkesbury youth group to the Urban Saints ‘Shine’ weekend for girls. There were outdoor activities such as the king swing, as well as bracelet making, pampering sessions and a chill zone.  The theme of the weekend was from Esther the girls to think about how they are daughters of God and warriors for him (Princess Warriors). Princesses know who their king is and warriors know who they’re fighting for.  Everyone went home with a scroll with the verse “And who knows but that you have come to your royal position for such a time as this?” Esther 4:14.  Bekky saw a number of familiar faces as a number of people from YFC were there to help out. The girls really enjoyed it and two of them gave their lives to Jesus, which is amazing!.

Please pray for Bekky and our other YFC One volunteers, Troy and Louissa as they seek to share Jesus with the many young people they encounter.  Pray also that this year will transform them and make them more like Jesus.